Channel 4 head Alex Mahon: ‘It’s not for me to oppose privatisation’

Alex Barker in London for the Financial Times.

The head of [the UK’s] Channel 4 will not actively oppose government legislation to sell the state-owned UK broadcaster, leaving parliament to decide the future of a business she described as being in “rude health” and a public asset.

Alex Mahon, chief executive of the commercially funded broadcaster, told the Financial Times she would remain “independent” during the expected legislative battle, focus on delivering Channel 4’s existing remit and only “advise” on the impact of it changing.

Speaking on Monday as the government formally unveiled its plans for the privatisation, Mahon marked a new phase in the history of a 40-year-old broadcaster that has stridently, and successfully, opposed half a dozen attempts to change its ownership model.

Mahon largely resisted repeating past anti-privatisation arguments during an hour-long interview, only needling “doomsayers” inside government who had questioned a publicly owned Channel 4’s viability in an age of streaming.

“Commercially, financially, creatively, we’re in the best health we’ve ever been, we’ve got more cash on books than we’ve had in a decade,” she said, adding it was “amazing” that this had been achieved in “the face of all this political pressure”.

“So I would say that the people who are doomsayers: this shows that we’re in good health. Rude health. So I’ve got to focus on how I can keep doing that for the next couple of years,” she said. “It’s not for me to oppose privatisation. That’s a government decision.”

In her five years at the helm of Channel 4, Mahon has seen off one attempted privatisation, relocated operations outside London, navigated the Covid-19 shutdown of production and delivered record revenues this year of £1.2bn, with a £100mn surplus. 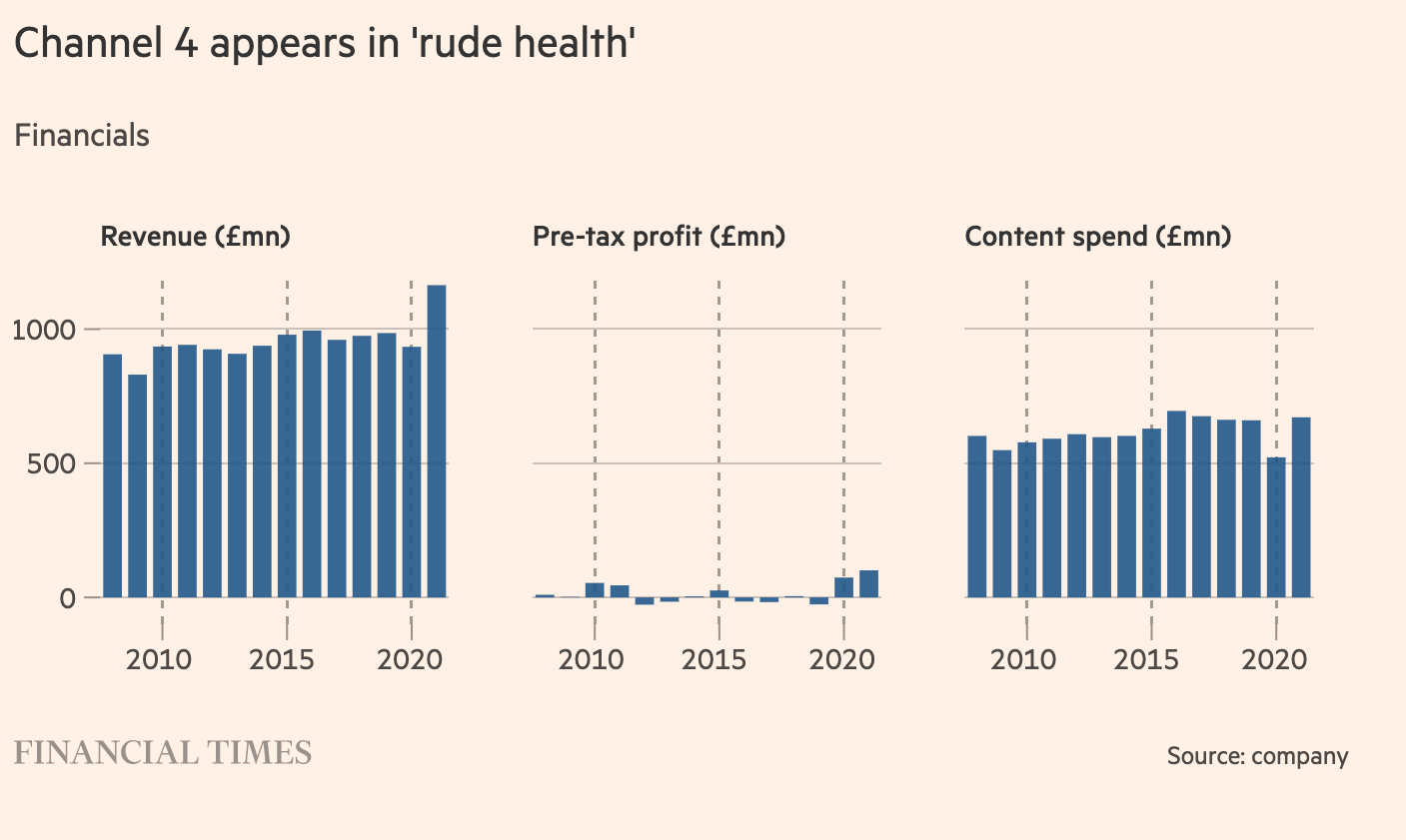 Unlike some rival broadcasters who “stuck their head in sand like an ostrich”, Mahon argued Channel 4 had successfully followed its younger audiences online, this year generating 19 per cent of revenues from streaming.

“As far as I can tell, we’re the most advanced in making that switch [among US and European broadcasters],” she said. “That hasn’t been very easy.”

But her channel’s prickly relationship with UK prime minister Boris Johnson has made its sell-off a priority for Downing Street, placed ahead of other reforms including a bill to check the power of tech groups such as Google and Facebook.

Culture secretary Nadine Dorries argues that only private ownership and investment will allow Channel 4 to thrive in a transformed media landscape. Analysts estimate sale proceeds could range between £500mn and £1.5bn, depending on the broadcaster’s public service remit.

It leaves Mahon facing the most precarious balancing act of her tenure: managing the broadcaster as it delivers an old mission and prepares for a new one, potentially with her remaining at the helm of a private, profit-driven group. She acknowledged that the challenge for the Channel 4 board was “peculiar” and “complicated”.

The battle over the bill paving the way for Channel 4’s sale is likely to be one of the most hard-fought in parliament over the next two years, with senior Conservative MPs and peers warning the privatisation will hurt Britain’s creative economy and hobble the channel’s public service remit.

Producers, advertisers, celebrities and mayors have mobilised against the plans, with more than 95 per cent of responses to a government consultation seeing no need to sell off the broadcaster established to serve young, alternative audiences.

Mahon pitched an alternative plan: maintaining a public ownership model while tapping private investment to increase spending on Britain’s creative economy, particularly outside London. But her vision was rejected by Dorries as unviable; the two have not spoken since March.

She expressed no regrets over her journalists’ coverage of Johnson — who was presented as a melting ice-sculpture in one 2019 election debate — or her failure to convince ministers that Channel 4 had a viable future in public hands.

“There’s a complexity in Channel 4, which is set out by order of parliament to challenge the status quo,” she said. “In general, whoever the status quo, it doesn’t always like being challenged.”

Even without Channel 4 taking an active position on the terms of its privatisation, Mahon’s “advice” may be a rallying point for the campaign to stop a private sale, promote hybrid options or strengthen the privatised channel’s public service remit.

Dorries’ white paper notably opted for reforms to maximise the commercial value of Channel 4. This included empowering it to keep the rights to shows and slashing quotas for spending with independent producers. Mayors outside London have noted how uncomfortably this sits with the government’s levelling up plans.

“If ever a private shareholder went to deliver the minimum of the licence requirements currently in the white paper, then that would be an impact of up to £320mn a year on the independent sector, and £86mn a year on spending in the nations and regions,” Mahon said, adding “and one might say that, as a private owner, why would you not go for the minimum?”

“If you are focused on maximising commercial returns, inevitably, you must move towards taking less risk,” she said. “Because things like the Paralympics, programmes about menopause, It’s a Sin, they don’t make money. They lose money.”

Mahon, who has spent most of her career in the private sector, declined to say whether she would be interested in eventually joining any bids for the company, saying her role for now was to remain independent.

“It is no surprise to me that Channel 4 is really interesting to people. It’s a great company, and it’s highly profitable,” she said. “All of that profit right now goes back into the creative industries. But we’ve done the really hard work of the digital conversion.”

Mahon sees Channel 4 as being well-placed to capitalise on rapid growth in ad-funded streaming, particularly as cost of living pressures limit the appeal of subscription-based services such as Netflix.

The broadcaster has also announced a partnership with YouTube to make available more than 1,000 hours of programmes on the site. Channel 4 will sell advertising that will be packaged with the content, which will be free to view.

But in the short term, economic troubles may filter through to the bottom line if the ad market turns. “We were up 20 per cent [on advertising revenue] in the first quarter this year, which is obviously delightful. But there will be pressure on the market this year,” Mahon said.

It is one of many uncertainties facing Channel 4’s staff over the coming year. “It’s just complicated, isn’t it?” asked Mahon. “Everyone’s got their mum phoning them up saying is their job OK — including me.”