On World Press Freedom Day: Perfidious threats on the rise

Today’s World Press Freedom Day does not offer pleasant news. A new report issued by 15 media freedom organisations partners to the Council of Europe’s Platform for the Protection of Journalism and Safety of Journalists, among them AEJ- shows that the number of alerts reported on the platform concerning serious threats to media freedom in Council of Europe member states in 2021 increased by 41%, from 200 in 2020 to 282.

Russia’s war against Ukraine, which is contrary to international law, has already cost the lives of more than two dozen journalists among the countless victims. And the aggressor, Vladimir Putin, is also waging a hybrid war with disinformation and fakenews. For example, a law passed immediately after the invasion prohibits journalists, including foreign correspondents in Moscow, from talking about a “war” or “invasion” and from questioning official bulletins. Those who violate it can be punished with up to 15 years in prison. Last critical media like the radio “Ekho Moskvy” or the TV station “Doshd” were closed down.

Since most Russians only consume state-controlled media, they believe the Kremlin propaganda about an alleged genocide of Russians in the Donbass. But sometimes there are glitches to be seen on TV: For example, the courageous protest of a TV journalist, or when revenge is demanded for the sinking of the Russian flagship “Moskva”, although officially a fire and a storm were to blame for the sinking.

The fact that the EU Commission banned Russian TV stations like “RT” and “Sputnik” from the cable networks was a justified action: these stations mainly broadcast war propaganda, which has nothing to do with media freedom.

Media freedom is increasingly under threat even in the EU. In Hungary, Viktor Orbán also won the parliamentary elections because most of the media were aligned with the government. Opposition leader Péter Márki-Zay was allowed to appear on state TV for only five minutes. Orbán, who also refused a TV duel with his challenger, as is customary in every EU country, unabashedly poured taxpayers’ money and probably EU subsidies into his election campaign. He spent ten times more money than the opposition coalition of six parties. Next victim: This week, the editorial office of the newspaper 168 Óra will be fired, by an owner loyal to Orbán.

The only good news: in Slovenia, Prime Minister Janez Jansa, a close ally of Orbán, lost the parliamentary-elections last week. Like his role model, he targeted independent media.

A new threat to investigative journalism is the increase in libel suits by corporations and politicians against the media, the so-called SLAPP suits (Strategic Lawsuits Against Public Participation). In this way, expensive claims for compensation are brought against investigative media, which can lead to ruin through legal fees alone. 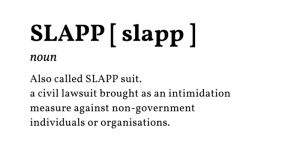 The EU Commission only recently presented a proposal for a directive against SLAPP suits. But for the time being, this only applies to cross-border cases.

Share
Facebook
Twitter
Pinterest
WhatsApp
Email
Print
Previous articleCoE Secretary General: Media should be able to report free from attacks and intimidation, including in times of war
Next articleDebate about press situation in Hungary on World Press Freedom Day
- Advertisement -