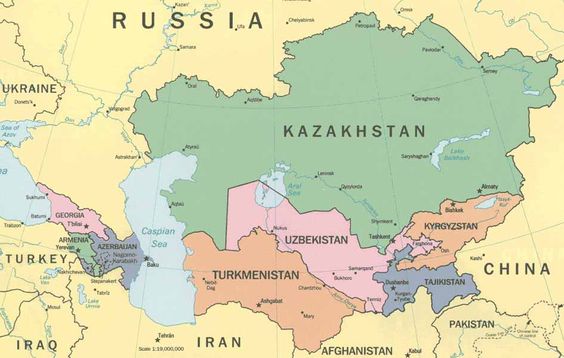 An Italian friend living in Kyrgyzstan today reported that refugees from across the border in Almaty, in neighbouring Kazakhstan, had started to arrive – amid indications that neither Kyrgyzstan nor Uzbekistan will join Russia and its allies in crushing the “terrorists” (DW video report) bent on dismantling the longstanding kleptocracy built up by the Nazarbayev clan.

“The Russian-led “peacekeepers”  arrived at the request of president Kassym-Jomart Tokayev, 68, who declared a state of emergency and accepted the resignation of the government. Tokayev claimed this morning that constitutional order has largely been restored. It seems unlikely: today, troops were ordered to open fire without warning, according to a BBC report.

In Almaty, Kazakhstan’s largest city, eyewitnesses described scenes of chaos on Thursday, with government buildings being stormed or set on fire and widespread looting. The interior ministry said 2,298 people had been arrested, while police spokesman Saltanat Azirbek told the state news channel Khabar-24 that “dozens of attackers were liquidated”. Video footage showed violent clashes between protesters and authorities in a number of cities.

The potential implosion of former Soviet Central Asia, with apparently rock-solid support for its dictators from the Kremlin, reminds of the suddenness of the collapse of the Eastern European Communist bloc in 1989.

The  AEJ’s newest colleague in the region, Max Hunder, editor of the newly-founded Kyiv Independent, has filed the following explainer of the story so far and his view of what’s likely to happen next. In the face of tough talk from US President Biden and the EU, Vladimir Putin may well have to put on hold his plans for bullying or invading Ukraine – he has 100,000 troops on its border. For the moment, at least.

In an interview with the Kyiv Independent, Kazakh-born Prof Sergiy Shtepa, head of the Dragomanov Sociological Center in Kyiv, said he

expected Russia to increase its initial “peace-keeping” troop commitment, get sucked into a difficult occupation, and take its focus off Ukraine: “Ukraine will get at least a few (extra) months to prepare,” he thought.

♦ For the record: the Budapest Memorandum, 1994

♦ AEJ members covering Kazakhstan should visit the Members Only section to see a suggestion for a reliable fixer from our colleague in Brussels, Gian Paolo Accordo