Turkey is one of the world’s biggest oppressors of journalism, in the same league as China. Since the failed coup in 2016 President Recep Tayyip Erdoğan has jailed hundreds of journalists, blaming them for the troubles that have been brewing in his country – largely as a result of his own misrule and folie de grandeur. 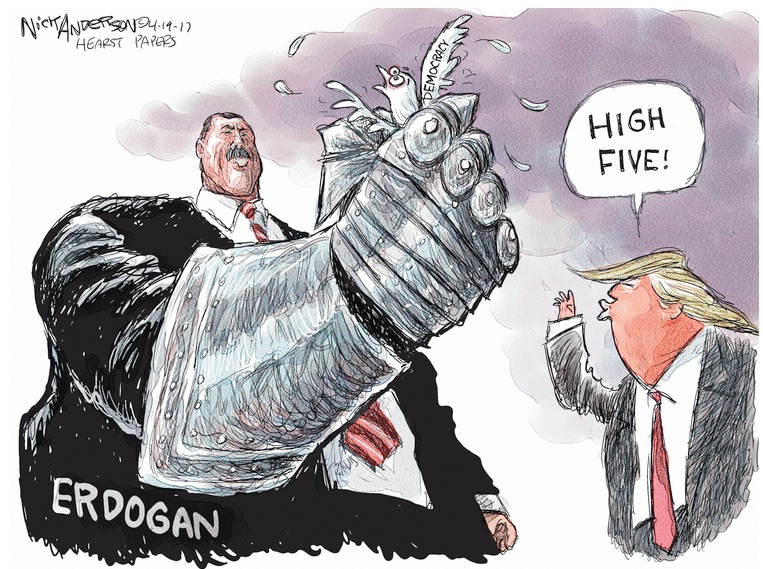 journalists accused of baseless and sometimes plain loopy terrorism charges: anti-government remarks on Twitter, op-ed opinions, and cartoons, which especially enrage him (see above) to the point of international debacles, recently with President Macron of France.

The AEJ is now helping to establish an International Press Academy in Izmir. “We are also looking at collaborative projects with the Izmir Journalists Association (the İzmir Gazeteciler Cemiyeti),” says the AEJ’s vice-president, Javier Fernández Arribas, editor of Atalyar in Spain. “The aim is to improve working conditions, not just in that region but throughout Turkey, where continuing pressure from Erdoğan makes the job an intensely uphill struggle.”

Izmir journalists, headed by the association’s president Dilek Gappi, and AEJ members, among them the AEJ’s man in Ankara, Prof. Dr. L. Doğan Tiliç, found the Izmir meeting illuminating and productive. It was especially welcomed by Turkish journalists who now fear a further wave of repression with a new social media law that came into effect in September.

Among the new rules:

Platforms have just 48 hours to obey Turkish court orders to remove content reported as offensive by either individuals or the government, with the risk of fines up to €4.3 million. restrictions on bandwidth, and blocked access to the platform.

The media situation has been made worse by a financial crisis which can reasonably be laid at the door of Erdogan’s incompetent management of the economy. This has caused special problems for what is left of the independent media, which has been withering on the vine  thanks to ever-tighter state controls. since the attempted coup d’état of 2016.

Mrs Gappi explained to her visitors that Izmir, with its rich historical past, had a huge potential for development. She explained projects being developed with the support of the European Union and the Netherlands, and offered the Turkish Journalists’ Association the option of participating in the creation of an International Press Academy.

This great project has the support of Tunç Soyer, a prominent opposition politician from the opposition party Republican People’s Party (CHP), and now mayor of Izmir. He has promised the academy will soon be operational, offering journalists international training and the chance to join forces in creating a network of media of Mediterranean cities.

Fernandez Arribas committed himself to persuading the EU of the need for professional, political, and financial support for Turkish journalism, in and beyond Izmir. He promised AEJ support in creating and promoting an International Press Academy in Izmir.