Kabul: relatives of rich given safe passage pretending to be journalists 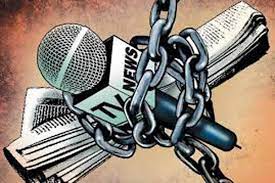 Letter from hiding in Afghanistan from AJT

JOURNOS LEFT TO ROT WHILE FRAUDULENT GIVEN SAFE PASSAGE

Freedom of expression and media were restricted after the Taliban took control of Kabul. Journalists have always been encountered the violence of Taliban militias. These restrictions and violence have intensified with each passing day.

Those journalists who have worked in various Afghan media outlets for the past two decades have taken firm steps to achieve freedom of expression and new values and to consolidate democracy, and their lives are now in grave danger.

In the current situation, the field of work and activity of journalists is severely restricted and even at the risk of losing their lives. Among our colleagues, most of them were the sole income earner in their families.

Now, two months after the Taliban came to power, they are struggling with many economic problems and many of them are hiding in a corner of the city for fear of ending their lives. According to the Afghanistan National Journalists Union new report over 70% of respondents received threats, at least 67% of Journalists surveyed are jobless and orders limiting the capacity of Afghanistan’s media are mounting daily under the control of the Taliban.

In addition, this vulnerable group has been forgotten by national and international institutions. Since the start of the rescue/evacuation operation (via Kabul International Airport), national and international media sponsors to save the lives of Afghan journalists has been negligent. Recently, many reporters; Makes a list of a large number of journalists based on their documents and journalistic backgrounds and shared with media sponsors such as the Afghan Journalists Safety Committee, Nai Supporting Open Media in Afghanistan, Afghanistan Journalists Center (AFJC), the Media Bazaar, the National Union of Journalists, etc.

They wanted to transfer journalists abroad to a safe place. Unfortunately, the officials of these institutions, ignoring the list of threatened journalists, not only did not cooperate with the group of journalists; instead, the relatives of these officials have been transferred to European countries and the United States in the name of journalists under high threat.

In the most recent case of misuse of journalists’ names and credentials, on September 25, 2021, the Bloomberg & Al Arabiya network published a report showing that Zamari Kamgar, the head of the airline (Kam Air), has expelled more than 155 members of his family and relatives, falsely describing them as journalists. This is great persecution for Afghanistan’s well-known journalists, who have spent many years in the most difficult of conditions, feeling responsible for their country and its people, for institutionalising freedom of expression.

Therefore, we urge all international media sponsors and journalists: First, as it turns out the number of pro-journalist organisations operating inside Afghanistan has not acted transparently in preparing the list of journalists and preparing the ground for their transfer abroad. Now our collective request to all governments, international organisations supporting the media, and journalists is to evacuate us with our family members from Afghanistan, which names and profiles are attached in a separate list.

We urge you to take urgent action as soon as possible to save us from the centre of the crisis, where even the conditions for survival are not predictable. Second, those persons and relatives of the head of the airline (Kam Air) who were transferred to the United Arab Emirates by the airline (Kam Air) on September 25, abusing the name and reputation of the journalists, should be returned and the perpetrators of this abuse and betrayal should be brought to justice. With respect, Afghanistan Journalists Trend (AJT)

Share
Facebook
Twitter
Pinterest
WhatsApp
Email
Print
Previous articleOlympia Forum – Ernst Reichel: “Merkel was considered a leader of the European Union but she was not”
Next articlePolish PM – rebel without a clause. Europe’s endgame?
- Advertisement -