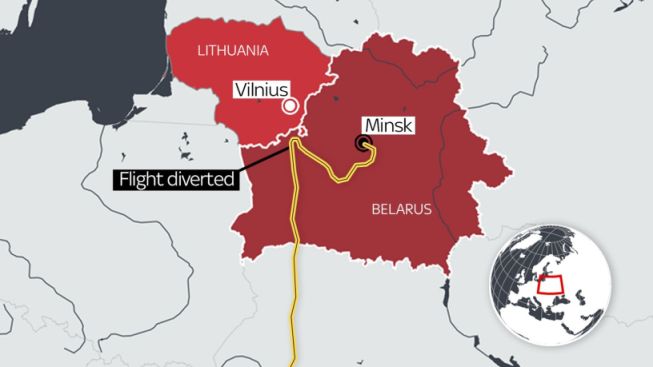 The first post-Covid (they hope) passengers at Brussels’ Zaventem airport over the weekend were greeted by an enormous poster. It demanded the release of the hijacked, kidnapped, and beaten Belarus journalist Roman Protasevich and of his Russian girlfriend Sofia Sapega.

The cause of democracy and media freedom for Belarus, not to mention preventing the appearance of a new North Korea in Europe, has been solidly backed both by the Council of Ministers and the Parliament, where the German chairman of the foreign affairs committee, David McAllister (CDU/EPP), declared that the people of Belarus “should know that they are not alone” in their revolt against President Alexander Lukashenko.

Tit-for-tat reprisals between Lufthansa and Russian authorities have stopped for the time being over the criminal hijacking of Ryanair flight 4978 in which 26-year-old Protasevich and his Russian student girlfriend were travelling on May 23 – they’d hoped – home to Vilnius.

But the huge international scandal provoked by their arrest, apparent torture and forced confessions is certain to figure in the upcoming June 16 summit meeting in Geneva of  Putin and US President Biden.

That follows a NATO Summit two days before, on June 14, at which Biden will be pressed to act by his NATO allies. It may prove to be a key moment in the murderous saga of 66-year-old Lukashenko’s régime and its brutal suppression of the free media and of anyone else who has got in the way of the former border guard, Soviet soldier, and deputy manager of a state farm.

How has he managed to hang on to power for 27 years, Belarus’s first (and thus far only) “president” who styles himself “the people’s president”? The clues are brute force and political blackmail of both the EU and Russia, according to RFE’s short film which sets out very clearly how the police state works, and how hard it will be to break it.

One often-overlooked headache for Moscow of the Belarus débâcle is its strategic military dependence on landlocked Belarus to ensure land access to Russia’s ice-free harbour in the Kaliningrad enclave. Since May 2004 this isolated patch of Russia, hq of the Baltic fleet,  has been jammed between two new EU Member States on the Baltic and surrounded on land by NATO members.

Belarus – an endless search for identity

June 9 testimony of banned US ambassador – “North Korea of Europe”

Well-founded fears of kidnap in Poland and Baltic states

Pavel Latushko, the minister who got away  (DE)