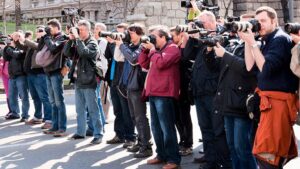 A 2020 state “Media Strategy Action Plan” was thought positive, but little else. The EU-funded mission registered numerous areas of concern about media freedom and safety of journalists which need to be urgently addressed, with “marked regression” on access to information. More information on EU delegation projects and encouragement of proper treatment of journalists here.

The report also raises concerns about public officials actively contributing to the polarisation of the media landscape, demonisation of independent media through direct verbal attacks, or weaponising pro-government tabloids.The report makes a series of urgent recommendations for both the Serbian government and international organisations.

The mission met with representatives from journalists and media associations, the Standing Working Group on Safety of Journalists, a selected group of Serbian journalists who have been targets of legal, physical or verbal threats or harassment, the Serbian Ombudsman, officials from the Serbian Government and representatives of international organisations.