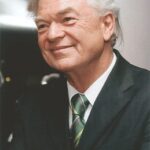 By Dieter Weirich*, the legendary journalist and politician who from 1989 onwards transformed Deutsche Welle into the global influence it is today. He contributed these thoughts for the AEJ on what he sees as the essential role of free media.

“I disapprove of what you say, but I will defend to the death your right to say it.” The French philosopher and writer Voltaire, who shaped the 18th century in France, is credited with this commitment. It underpinned the Enlightenment. In a world that is becoming increasingly intolerant, Voltaire’s commitment could stand as a reminder of the meaning of World Press Freedom Day.

For more than two and a half decades, May 3, the Press Freedom established by UNESCO has reminded us of the importance of free reportage for democratic societies. Independent, pluralistic media make up the liberal order and are an indispensable part of the rule of law.

Democracies are islands in the world. Authoritarian regimes are becoming increasingly brazen in their repression of reporters, whether they see themselves as correspondents for traditional media, bloggers, or citizen journalists. And the triumph of social media is blurring the boundaries of the journalistic profession.

The international journalists’ organisation Reporters without Borders logs the oppressive statistics. More than 300 journalists are in prison. If we look at media developments in more than 180 countries, freedom has deteriorated,  above all in Asia and especially in the People’s Republic of China, Saudi Arabia, and Egypt. Beijing is particularly aggressive, evidently seeking a new world media order. Independent voices are a nuisance, interference in domestic affairs.

Like the Chinese, the Russians spread a whitewashed image of their country through their state-controlled foreign broadcasters, while the influence of the rulers is simultaneously increasing at home. Populists like Bolsonaro in Brazil operate with disinformation, seeking support in social media, conducting election campaigns on WhatsApp.

In Africa, the situation has improved slightly in the last decade, although the situation in individual countries varies greatly. In an international comparison, Europe is of course in a good position. Germany has improved from 13th to 11th place in the current ranking.

We have one of the most diverse media systems in the world, a free, privately-organised press, a strong public broadcasting system that competes with private providers in a dual system and the growing social media. The deteriorating economic situation of newspapers is admittedly as much a portent as the increasing hatred and incitement in media discourse. Not only Voltaire would wish for a more cultivated discourse.

*As its youthful Intendant (Director) from 1989 – 2001, Dieter Weirich dramatically transformed what had been only a state-owned shortwave radio service into one of the most powerful, multilingual, and non-partisan media influences in the world. DW broadcasts in seven core languages (Arabic, Chinese, English, German, Spanish, Portuguese for Brazil, Russian, and since 2007 in Persian), as well as a mixture of news and information in 23 other languages over the Internet and radio. Despite its state ownership, it has retained its fierce independence. Weirich’s  humour and rich experience have made him a legend in  German journalism.