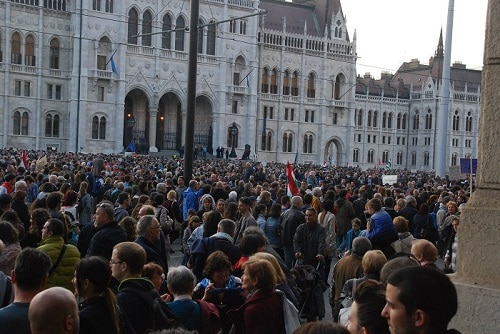 AEJ members in Budapest attended Sunday’s mass demonstration outside the Hungarian parliament. Tens of thousands of protestors rallied to protest against a new law which was rushed through parliament last week by the Fidesz-led government of Viktor Orban.

The law creates onerous and complex obligations on foreign-funded universities in Hungary. The survival of Central European University, which is seen as an outstanding centre of learning and a champion of liberal values and free speech, is seen as under grave threat.

The university says the new legislation will make it impossible for it to function. Long lists with the names of people in Hungary and abroad who have signed a petition backing the CEU and its values were held up in the crowds.