Those event reports are summarised here: 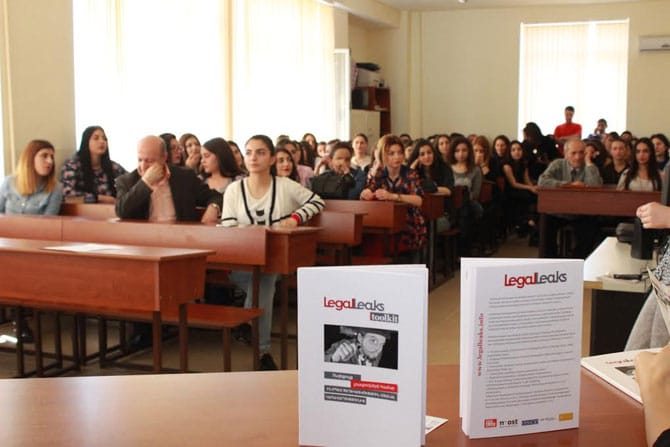 On the occasion of World Press Freedom Day, a reception was held at Yerevan State University’s Faculty of Journalism with the head of AEJ-Armenia Liana Sayadyan who is also vice-president of “Investigative journalists” NGO and deputy Editor of Hetq.am.

Liana presented to journalism students the Armenian version of the Legal Leaks toolkit– a guide for journalist and citizens seeking to access government-held information.

The guidebook was prepared by Access Info Europe and the Berlin-based n-ostorganization that brings together journalists, Eastern Europe experts and media initiatives from more than 40 countries.

The guidebook has been translated and edited to fit local legal parameters by the Investigative Journalists NGO in Armenia.

The toolkit is based on a comparative analysis of the access to information of the 42 countries of the Council of Europe region which have such laws.It also broaches issues on information security and offers tips on the safest ways to transmit information.

Liana Sayadyan, who served as editor for the Armenian version of the guidebook, congratulated those in attendance on the occasion of World Press Freedom Day.

“I hope that we never encounter hindrances while doing our jobs and that we’ll truly be able to perform our mission. We all realize that we have an important role to play to improve the current and future situation in our country. Reporters are the engines for social change,” Sayadyan told the budding journalists.

After the reception, Sayadyan responded to audience questions regarding the problems involved in getting access to government information, how freedom of information laws are applied in Europe, and the peculiarities of investigative reporting.

The Bosnia & Herzegovina Journalists Association, with the support of the Friedrich Ebert Foundation, presented the 2016 findings of the detailed investigation and comparative report on “Media liberties / freedoms in BiH from 2009 to 2016” at two separate events presentation held in Sarajevo and Banjaluka

This year’s investigation demonstrated that BiH citizens still mostly believe in media houses and religious communities, but that they have a minimum of trust towards politicians and political parties. A significant increase in public confidence in the country’s media among the International Community was also noted.

During the conference, Michael Weichert, director of Friedrich Ebert Foundation, stated that this investigation contributed to the improvement of media liberties / freedoms in BiH. “It was a pleasure to conduct this investigation, along with our partners, which was what we have been doing on an annual basis. Investigation results showed that citizens had mostly been confident in media houses as institutions. This may be considered a positive thing, but it is disencouraging that BiH citizens showed no trust in state institutions. I acknowledged that, according to results gained, citizens expect media houses to work harder for social and community change”, added Mr. Weichert.

Boro Kontic, director of Media Center said that the biggest threat to media liberties / freedoms were political and financial dependence.

“This dependence creates limited society. We can see that there have been no investigative stories published or posted, including stories that are important for citizens and this is where the above mentioned dependence of the media can best be seen. There are a notable number of public media houses that act as government associates. Citizens are able to recognize this lack of independence”, claimed Kontic. Enes Osmancevic, university professor with the Faculty of Philosophy in Tuzla. He stated that government officials exercise power in a totalitarian manner at all levels.

“Non-transparent financing and political pressure imposed upon media houses represent a huge problem. Media houses are often biased. Public seems rather latent and show no signs of criticism for this issue. It would be necessary to amend media legislative and pass new laws that would eventually prevent corruption, governing shares with media houses, edit educational system and introduce ownership transparency in media houses”’, claimed prof. Osmancevic.

Borka Rudic, general secretary of the Association of BiH Journalists emphasized that additional effort in working with media editors resulting in eventual increase of trust by the public would also be required.

“Editors are the key to this problem since they decide the nature and content of the program. It is necessary to work with editors and alter editing policies with the purpose of creating an increased level of information pluralism”, she claimed.

At the same time, the Report’s results were also presented in Banjaluka at the BHN Journalists’ Club premises in Banjaluka. The issues regarding the investigation were covered by Tanja Topić on behalf of Friedrich Ebert Foundation, Milkica Milojevic, president of the Association of BiH Journalists, Sinisa Vukelic, president of Banjaluka Journalists’ Club, Davor Sesic, SDS (Serbian Democratic Party) Member of National Parliament of the Republic of Srpska, and Malden Mirosavljevic, professor of public opinion in Banjaluka. The investigation was carried out during this period of 8 March – 25 March 2016 and samples were used on 500 respondents, based on average households in BiH. A similar survey has been confucted by BiH journalists on a regular basis ever since 2009 and has been supported by Friedrich Ebert Foundation with the purpose of examining the opinion by of the BiH citizens regarding the issue of the protection of journalists and media liberties / freedoms in BiH.

ROMANIA: DEBATE ON THE STATUS OF PUBLIC RADIO AND TV ÎN ROMANIA

On the occasion of the annual „WORLD PRESS FREEDOM DAY”, AZIR, the Romanian Section of AEJ, organized on 26thApril a challenging debate under the title „The Status of TVR and SRR – the Romanian National Public Television and Romanian Radio Broadcasting Company: the condition of de-politicization”. It was moderated by Teodora Stanciu, president of AZIR, and Adrian Sturdza, member of AZIR.

Former and current managers of Public Television took part in the debate and presented possible solutions to the severe problems of TVR.  Alexandru Lăzescu, former PDG of TVR, proposed to rethink the mission of the institution, given that it cannot function anymore with objectives set in 1994, and to raise the radio-TV tax, which is very low at the moment – just 4 lei. In his opinion, this could be done through a government decision.

Lăzescu also showed that the debt of158 de millions Euros was gathered in time, through the increase in wages of70% up to 2004, but also because of the dramatic fall in the advertisement market.

Regarding the politicization of TVR, the ex PDG said that the key problem was that the activity report of the president and general director could be rejected whenever the parliamentarians want to change the president and the members of the Administrative Board.

George Orbean,member of AZIR andmember of this Administrative Board in TVR, who was proposed by the Cioloș government and elected for the position of director general of TVR by this Board, but rejected by the Parliament, said that that the huge debt of the Public Television can be explained ”through a mix of incompetence, political complicity and irresponsibility”.

He considers the only solution for saving the Public Television to be the implementation of a special administration regime, for a three months period „ during which all activity should be frozen, given that TVR is the target for legal forced executions from people who have won in court and who reclaim their money”. Orbean recommends a ranking of payments and defining the strategicrole of Public Television in 2016, as well as introducing evaluation criteria for the activity of the employees.

Cornel Mihalache, a member of the Administrative Board in TVR, said that the Parliament rejected without reasons two candidates – George Orbean, member of AZIR, and Monica Ghiurco, producer in News Department – for the PDG chair.

Andrei Dimitriu, former director of the Romanian Radio Broadcasting Company, stated that the essential mission ofTVR and SRR should be to educate. In his opinion, the fusion between public radio and television would be a big mistake because the former doesn’t have so much profit as to cover the losses of TVR, and both would run the risk of going bankrupt.

Dimitriu considers that the only solution for TVR is a „Greek scenario, by transferring the debt to a juridical entity that is going bankrupt and changing the name”. Regarding the politicization of the two public institutions, he pointed out to the irresponsibility in selecting the members of the Administrative Board who don’t have management experience.

By Skype, from Timișoara ,Brîndușa Armanca, member of AZIR, stated that the political class has made TVR and SRR clientelistic institutions. She argued that political intervention is visible in the recent rejection of two candidates for PDG of TVR, nominated by the Administrative Board, by the members of Parliament without concrete reasons.

Regarding the problems of the Public Radio,Ioana Diaconescu, writer and member of AZIR, has read some anonymous complaints from employees ofSRR against its PDG, Ovidiu Miculescu, and the former director of the Media Cultural Center, Oltea Șerban Pârău (sentenced to a year of jail with suspension, but hired again as counsellor in the same department). They talked about the fear installed in the institution. Ioana Diaconescu is a researcher in CNSAS (The Archive of the Former „Securitate” – Politic Police from Ceausescu Era) and found that Ovidiu Miculescu was an informer for the Securitate, in 1987.

FOR THE DIARY: UPCOMING EVENTS PLANNED BY AEJ SECTIONS:-

In the spirit of World Press Freedomn Day AEJ-Bulgaria will stage a conference in June on the theme of “Journalism on the Edge: How to Cover Crises and Accidents With Respect for the Rights of the Victims?”. The conference will focus on on encouraging journalists in Bulgaria to raise the quality of reporting such events with sensitivity and respect for the piblic’s right to know, without the crude sensationalism that has become normalised in much of the country’s media in recent years.

To mark World Press Freedom Day the School of Communication and Media, jointly with the Slovak Section of Association of European Journalists,will organise a seminar in Bratislavaon Fridayafternoon,May 20, 2016, where theywill present results of research related to media coverage of corruption and corrupt practices in the media and among journalists. The Seminar will show the results of computer assisted content analysis of corruption coverage by four leading Slovak newspapers Sme, Pravda, Novy cas and Hospodarske noviny in the period 2004 to 2013, as well as a selectionof in-depth case studies tacklingvarious roles and interactions of media and journalists when dealing with and/or covering corruption.