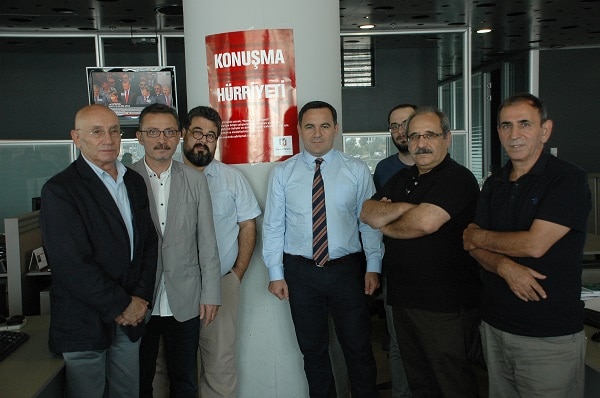 Hurriyet’s Istanbul headquarters and Ankara offices were attacked  on Tuesday for the second time in a week by an angry group of close to 100 supporters of Turkey’s President Erdogan and the ruling AKP (Justice and Development Party). The mob forced their way into the garden of the newspaper and broke some windows of the building. They said they were protesting against Hurriyet’s reporting about  the recent deaths of a number of Turkish troops at the hands of PKK (Kurdistan Workers Party) militants, and the forthcoming elections..

An MP of the AKP who was among the group in the first attack reportedly declared that regardless of the result of the  1 November election his supporters would make Mr Erdogan “president” (of a presidential system), and that media such as Hurriyet would disappear after the election.

Visiting the Ankara office of the newspaper on Wednesdayin the name of Turkey’s G-9 Journalists Associations Platform and the AEJ, Dogan Tilic said:“The attack against Hurriyet and the statements made by an MP who took a leading part in that assault are unacceptable in any democracy”, and that AEJ stood in international solidarity with the paper.

The Ankara headquarters and several other local offices of the pro-Kurdish People’s Democratic Party (HDP) were violently attacked in self-styled ‘anti-terrorism’ protests in recent days.