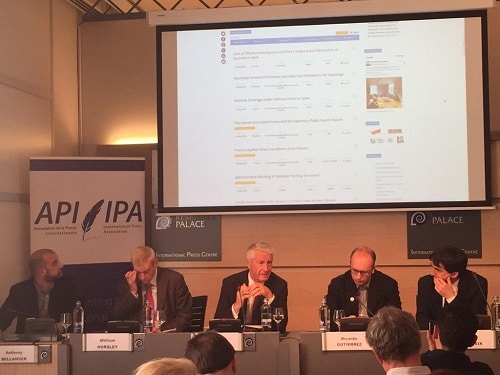 The Secretary-General of the Council of Europe, Thorbjorn Jagland, says Europe has failed in the past to put in place strong mechanisms protecting freedom of expression and the safety of journalists. But at a press event in Brussels on 19 May he presented the Platform on the protection of journalism and the safety of journalistsas an important tool to counter threats to free expression across Europe. The Platform was launched on 2 April as a unique cooperative project between the Council of Europe and five Partner organisations: the AEJ, Article 19, the EFJ and IFJ, and Reporters Without Borders.

So far the Partners have reported 50 alerts about serious concerns for media freedom, ranging from the murders of journalists in Russia and Ukraine, and the Charlie Hebdo massacre of 8 journalists and cartoonists in Paris last January, to cases of journalists wrongly imprisoned in Turkey and Azerbaijan, prosecution of the journalist Edouard Perrin for exposing the Luxleaks tax avoidance scandal in Luxembourg, the forced closure of Tatar-language media outlets in Russian-occupied Crimea, a harsh new Spanish public security law banning press photographs of on-duty police, and plans for a new French law giving the government sweeping powers of mass surveillance without adequate judicial oversight.

So what is this Platform? It provides the Partners with an area on the Council of Europe’s website where their verified reports are published using a clear system of categorising attacks, threats and suspected violations of states’ obligations on a website that is accessible to all. What’s really important is that those alerts are also communicated promptly via the Council of Europe to the member States concerned, which are asked to respond to calls for remedial action arising from the alert. Each contributing Partner is responsible for the information that it posts.

Already in one case – that of a Slovenian journalist, Anuska Delic, charged with the offence of publishing classified material — the Slovenian government responded to an alert on the Platform from the EFJ/IFJ by saying that it would amend the relevant law, which it admitted was too restrictive of media freedom. It was a clash between the rival claims of state secrecy and the need for reporting on a matter of public interest (about the political connections of a Slovenian neo-Nazi group). The Slovenian authorities acknowledged the need to change the law out of respect for freedom of expression as a fundamental right in a democracy.

But Mr Jagland states in his latest annual ‘State of Human Rights in Europe’ Report, also published on 19 May, that the erosion of standards of press freedom in many parts of Europe has been deeper and more serious than governments have realised until now. He points to the lack of judicial independence and threats to media freedom – especially arising from excessively restrictive terrorism laws – as the two big challenges to democracy on the continent. Ricardo Gutierrez, general secretary of the European Federation of Journalists, said the most important consequence of the platform should be stronger follow-up actions after violations are reported.

The Council of Europe has also announced it will launch a three-year programme to improve protection and safety of journalists, including support for national mechanisms and institutions such as ombudsmen and press commissioners. The Council’s own published findings say that only three out of 47 member States have adequate safeguards for freedom of expression on the Internet, while in more than 30 of them the rules are too obscure, vague or secret even to assess if their practices meet international standards or not.

But so far few details have so far been announced about those programmes to restore press freedom and judicial independence. Sadly, many journalists’ groups are disillusioned in countries where media workers face daily threats to life or limb, fiercely repressive laws and regular official harassment. They have lost any real hope that the Council of Europe, or the European Convention on Human Rights which the Council upholds, or the European Union, will help them practically in their struggle to report matters of urgent public interest like corruption and abuses of state authority without fear of reprisals.

But the Association of European Journalists spoke out in Brussels for the Platform and other Council of Europe initiatives to become the launch-pads for a major transformation in the dismal human rights landscape of the wider Europe that is portrayed in the Secretary-General’s formal report. We believe that is possible. The AEJ wants to see a reversal of the trend in recent years for governments in Europe to censor, harass and intimidate critical journalists and NGOs.

What is needed for such a transformation? First, all concerned should consciously build on the new public recognition that the European Convention system is in crisis and the assault on press freedom is at the core of that crisis. It is positive that the Committee of Ministers of the Council of Europe has (after long delays) approved the setting up of the safety of journalists Platform. A new dialogue is starting, as states respond to the alerts on the Platform and are asked to re-examine or revise their laws or practices which impede legitimate journalistic inquiry.

We should acknowledge the leadership of those in the Parliamentary Assembly of the Council of Europe (PACE), including successive Rapporteurs on Media Freedom, who first proposed the creation of a mechanism like the new Platform 6 years ago. The French government played a helpful part by making the formal proposal for the Platform, and many other states have vigorously supported it. Now it is vital that every European state heeds the multiple warning signs that are highlighted on the Platform and by other authoritative reports.

Indeed, governments should not wait until the NGOs point an accusing finger at them. Instead they would do well to quickly repeal or revise the laws and other obstacles which they have erected in the way of the press freedom which they say they believe in. That means removing draconian laws on defamation, secrecy and national security, restoring judicial oversight to governments’ surveillance practices, enacting effective laws protecting the confidentiality of journalists’ sources (as the Netherlands, belatedly, is now doing), and making transparent freedom of information laws that allow the media and citizens to hold governments accountable.

Secondly, the AEJ and other Partner organisations made clear they expect that the Council of Europe will live up to the public pledges made by the Secretary-General and other senior figures to take prompt and meaningful action to press member states to meet their binding legal obligations under Article 10 of the Convention, on freedom of expression and media freedom. That should include public admonitions and determine follow-up actions using the Council of Europe’s full resources and authority when serious violations occur. It is vital that the Guidelines of the Committee of Ministers of the Council of Europe’s on eradicating impunity for serious human rights violations are vigorously enforced. To Europe’s shame, the great majority of murders of journalists – in Russia and Ukraine, in particular – as well as many abductions and violent assaults, remain unresolved and unpunished.

Thirdly, the culture of the inter-governmental Council of Europe needs to change, to inject a new sense of urgency into ensuring that the member states implement their obligations under the Convention and following the judgements of the Strasbourg court. Too often, the organisation appears sleepy in the face of deteriorating standards and serious violations of basic rights. The essence of the European Convention is that it protects individual and minority rights against over-mighty governments. In reality the selfish interests of states often drive the institution into an unseemly silence.

States need to show a much keener responsiveness to the acute concerns of journalists and others civil society groups. Citizens have a right to expect that member states – the missions in Strasbourg, the delegates of states in the inter-governmental committees, and the senior ministers in the capitals – respond fully and promptly to requests for cooperation from the Secretariat. Why is it that questionnaires related to the work of the Media Steering Committee aimed at improving compliance with Convention standards on journalists’ safety and impunity have been ignored (or not replied to) by the majority of states? It is simply not good enough.

A key test lies ahead: later this year the Council of Europe’s expert committee on the protection of journalism and safety of journalists is to submit a draft of new Guidelines on protecting press freedom to the Committee of Ministers for their approval. It will set out in detail how member states can put in place effective safeguards for free expression and press freedom, reviewing and amending oppressive laws to ensure that they honour their positive obligations on the protection of journalism as expounded in many Strasbourg court judgements.

This initiative is also the outcome of many years of debate — and of foot-dragging and delays. In April 2014 the Ministers’ Representatives (Ambassadors in Strasbourg) of the member states adopted a Declaration on these issues with the force of ‘soft law’ . It “urges member States to fulfil their positive obligations to protect journalists and other media actors from any form of attack and to end impunity in compliance with the European Convention on Human Rights and in the light of the case law of the European Court of Human Rights; and invites member States to review at least once every two years the conformity of domestic laws and practices with these obligations on the part of member States”.

This could be the start of the transformation that is urgently sought by the Platform partners and others on behalf of journalists and in defence of the rights and freedoms set out in the European Convention. A better future lies in the hands of Europe’s governments if they now show they are sincere about ending the attacks and undue pressures against journalist which they have already said are ‘unacceptable’. Now it is time for the states of Europe to deliver on their promises.

The AEJ is an Observer in the Council of Europe’s Steering Committee on Media and Information Society (CDMSI); William Horsley is a member of the Expert Committee on the Protection of Journalism and the Safety of Journalists, MSI-JO (2014-2015)