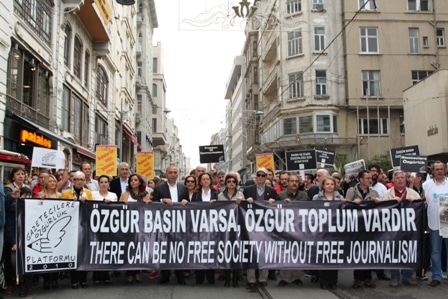 To mark World Press Freedom Day a coalition of journalistic organisations in Turkey staged a mass march and rally in Istanbul on Sunday and announced a joint statement denouncing the routine misuse of power by the Turkish government.

The international Board of the Association of European Journalists strongly supports the urgent demands in the Statement,‘Freedom is the oxygen of journalism, journalism is the assurance of democracy’.

It was read out at the demonstration by L.Dogan Tilicand is signed by the Turkish G9 Platform, the AEJ in Turkey, and a total of 90 Turkish media-related organisations.

The Statement calls for the freeing of all 21 journalists currentlhy in prison; the ending of a ban on the free workings of journalists’ trade unions; an end to government-backed pressures to suppress criticism of the government and reporting of matters of vital public interest; and a stop to the routine banning of large numbers of websites without proper judicial oversight.

The Turkish authorities are currently imprisoning 21 journalists and they have launched lawsuits against several hundred others, causing massive disruption and interference in the vital work of the media.

Read the Statement in French