Burgenland – 25 years after the fall of the Iron Curtain …. 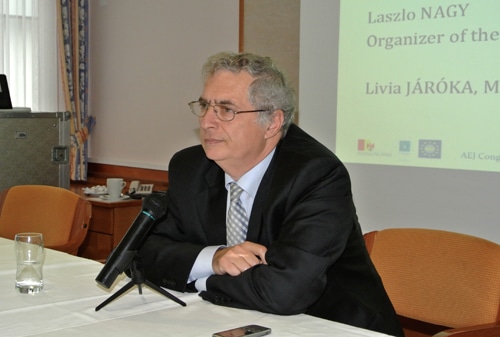 The AEJ Congress in Neusiedl opened with an address by László Nagy, one of the organisers of the Pan European Picknick at Sopronpuszta near the Neusiedl Lake in August 1989 – a defining moment in the lead-up to the collapse of the Iron Curtain.

Mr Nagy outlined the events leading up to that historic day … In 1965 an alarm system had replaced the original ‘iron curtain’ of barbed wire and mines built in 1949 … by 1988, Hungarians were entitled to passports and Secretary of State Imre Pozsgay had declared that the electronic alarm system had outlived its usefulness, but how to proceed …

In November ’88 Miklos Nemeth became Prime Minister and decided to test the water ….an economist, he could see that the Hungarian economy was in trouble and that maintaining the ‘iron curtain’ was costing a fortune. In early ‘89 he held a meeting with Russian leader Mikhail Gorbachev about the ‘iron curtain’ and forthcoming elections – Mr Gorbachev apparently told him that Hungary should decide and that there would be no repeat of the invasion of 1956.(there were 80,000 Russian soldiers in Hungary at the time)

In May of that year, plans were announced to switch off the alarm system along the Austro-Hungarian border (which made up 250km of the 1400km curtain). At a dinner for a visiting MEP the idea of a picnic was born, to demonstrate to neighbouring countries what was happening in Hungary.

Many East Germans, already sensing that Hungary was liberalizing more quickly than surrounding countries, had travelled to Hungary that Summer – ostensibly as tourists, but many were hoping to find a route to the West. Picnic organisers later discovered that flyers announcing the picnic had been distributed to 50,000 tourists/refugees … at 3pm on August 19th, a flood of East Germans poured over the border into Austria and crucially the Commander of the temporary border station refused to fire on them.

Mr Nagy said the organisers never thought it would be so easy and would lead to the fall of the Berlin Wall within months …He says they still don’t know for sure how much Government support they had or who distributed the flyers to the East Germans … they await the release of State papers in five years time.

Questioned afterwards about the risk of another Iron Curtain in relation to Ukraine, and the ending of liberal democracy in Hungary under the leadership of Mr Orban, Mr Nagy replied ‘too much liberalism is bad for us’ !

Harald Ladich who works for “Regional Management Burgenland” (RMB) explained how the region profited from EU-funds when Burgenland became Austria’s only “target Nr 1”-region. When Hungary joined EU in 2004 a wide crossborder-cooperation began. Austrian companies opened subsidiaries over the border to make use of lower wages there and conquer new markets.

Mátyás Firtl, member of Hungarian parliament for the Sopron region (Fidsz-party), explained how Hungary used EU-funds for projects in infrastructure and tourism. He gave examples for crossborder cooperation in schools, transport and tourism.

There followed a session with Lívia Járóka, an anthropologist , who became the first Romani woman to be elected to the European Parliament. She became an MEP in 2004 at the invitation of Mr. Orban, and served until June of this year.

Ms Járóka grew up in Sopron, her father ethnically Roma, her mother, Hungarian. In 1989 she was 15 years old, Communism was falling apart she said, and her family could feel it, (though they weren’t allowed to talk about it at school!) In the previous couple of years they had heard Western radio for the first time and Western literature was beginning to appear on bookshelves..

However, no-one was watching what happened with all this freedom … a new phenomenon, that of hate speech, came to the fore as there were no laws. Roma people lost jobs and poverty came into the open. Post-Communist leaders weren’t up to the task she said (while studying in the UK she had observed how the Government and the EU worked)

Ms Járóka said applying to join the EU opened up Hungary to further scrutiny and was another step towards system change – what the EU gave us she said, was a voice for the poor of whom there are 40 to 80 million in Eastern Europe – they have three times the cancer rate, are 5 times more likely to have a chronic disease and are likely to die 15 years earlier than their Western counterparts.

‘Poverty reduction must be kept on the agenda’ she says, the new EU Commission must understand post-Communist poverty, and it is the task of the free press to let the world know about these poor –‘ not knowing the history of the countries who joined in 2004 means we can’t build on what unites us’.

Ms Járóka was also questioned about Fidesz and its move away from liberal democracy – she says she feels safer – since 2010 anti-Roma marches have stopped and she said ‘Mr Orban has a vision’.