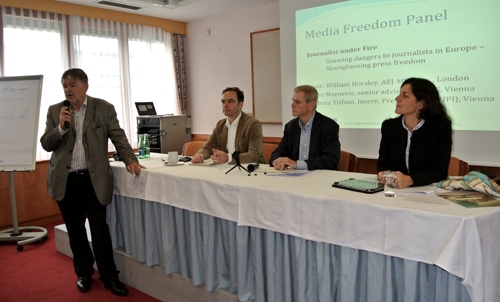 At the AEJ’s 2014 Congress on 17 October members of the Association of European Journalists from across Europe met in Burgenland, Austria to discuss topical reports detailing violence, harassment and interference with the work of journalists from colleagues in Armenia, Bulgaria, the countries of the EU’s Eastern Partnership, Hungary, Romania, Turkey and Ukraine. Frane Maroevic, a senior adviser in the Vienna-based Office of the OSCE Representative on Media Freedom and Barbara Trionfi, press freedom adviser in the International Press Institute (IPI) shared their concerns with AEJ members about the proliferating threats to journalists and journalism.

During the half-day debate members voiced extreme concern about the murders by the so-called Islamic State in Syria of journalists James Foley and Steven Sotloff, and aid worker Alan Henning and the abductions of a number of other journalists of different nationalities; and the killings, assaults, abductions and injuries inflicted on media workers covering the conflict in Crimea and parts of eastern Ukraine both before and following Russia’s violation by military force of the territorial sovereignty of Ukraine.

Frane Maroevic drew attention to the frequent interventions made directly to participating States of the Organisation for Security and Coperation in Europe by  the OSCE’s Representative on Freedom of the Media, Dunja Mijatovic,  and invited journalists to report abuses and threats against the media by e-mail t o[email protected] or to join the lively conversation about topical issues of concern on Twitter on @OSCE_RFoM.

Barbara Trionfi outlined IPI’s vigorous campaigns to protect media freedom through monitoring, country visits and reports published on http://www.freemedia.at/. She urged journalists to investigate and expose attacks on the press and chronic failures by some States to prosecute and punish those attacks which give rise to cultures of impunity protecting the perpetrators from facing justice. The United Nations General Assembly has highlighted the global importance of eradicating impunity. It has proclaimed 2 Novemberas International Day to end Impunity for Crimes against journalists. A calendar of some of the major events that will mark the Day can be seen in the AEJ Media Freedom Representative’s Report, below.

There was outspoken criticism of the harsh and inflammatory attacks directed against individual journalists by public figures in Turkey and Montenegro, which have placed the subjects of those insults at risk of physical violence; and AEJ members called for the Turkish Parliament to reject the draft judicial package which would expose journalists to arbitrary and unlawful searches, arrests or seizure of property by removing the requirement for police to show they have “concrete evidence” before obtaining a search warrant; the draft amendments to the law would also increase the length of prison sentences for criticism of figures in public office, in contradiction to Turkey’s international obligations.

Tony Papaleo, the outgoing head of the Czech Section, spoke to the Congress about his experience in the past two years since he infiltrated a suspected international money-laundering ring, then secretly recorded evidence of the gang’s plans and later handed over some of his video recordings to a court in HongKong. The court accepted them as evidence in a trial that resulted in the conviction of a man of Slovak nationality. Tony said he had received a number of violent threats, and in July this year he was seriously injured in a knife attack by a group of youths in Phuket, Thailand. No clear link was immediately established between his stabbing and his role in exposing international criminal activities.

Luigi Cobisi of the Italian Section presented an outline of the ambitious expansion plans of the specialist NGO  Ossigeno per l’Informazione (Oxygen for Information)  ,which applies its own rigorous method to monitor and verify incidents of violence, threats and abuse targeting journalists in Italy. Ossigeno has published details of over 2000 such cases over the past six years. The organisation is setting out to demonstrate that hidden forms of censorship are more pervasive and damaging to the fabric of press freedom and free societies in many parts of Europe than has been recognised. The AEJ applauds the work of Ossigeno and looks forward to cooperating with it as well as other NGOs which defend free and independent journalism.

William Horsley, the AEJ’s media freedom representative, presented his regular  Media Freedom Report (attached bellow), which outlines the AEJ’s engagement with the Council of Europe as well as EU bodies and others to strengthen the legal and other protections for journalists.William is one of only two non-governmental members of the current Council of Europe Committee of Experts on potection of Journalism and safety of journalists, known as (MSI-JO). That group of experts is currently tasked with drafting a detailed Recommendation to member States on practical and detailed measures that may be taken to fulfil their obligations for press freedom and journalists’ safety.

Firdevs Robinson, a member of the AEJ UK Section member, reported on the subsequent wide-ranging AEJ debate on threats to journalists and press freedom in her  FirdevsTalkTurkey blog.

Armenia: Protection of sources, and how law-enforcement failures add to the dangers facing journalists

In that text the representatives invite member States of the Council of Europe to review at least once every two years the conformity of domestic laws and practices with their positive obligations to protect journalists from any form of attack and to end impunity.

In the light of that Declaration, the AEJ adopted the following Resolution:

The annual General Assembly of the European Association Journalists (AEJ) meeting in Burgenland, Austria, condemns as unacceptable the high number of violent attacks against journalists, acts of arbitrary harassment and interference, and other attacks against media freedom and freedom of expression in European countries, including Azerbaijan, Belarus, Turkey and Russia.

The members of the Association call on all States to fulfil the solemn commitments to create a safe and enabling environment for journalists which they made in the UN General Assembly Resolution on the Safety of Journalists that was adopted unopposed in December 2013; we welcome the declaration in that Resolution of 2 Novemberas International Day to end Impunity for Crimes against Journalists and call for urgent actions by state authorities, professional bodies and civil society groups to eradicate impunity, in line with the special events being organised by the Council of Europe, UNESCO and other Inter-Governmental Organisations.

We remind the governments of Europe, in particular, of their obligation to take the necessary measures to protect journalists from all forms of attacks and threats and to ensure that crimes against journalists are swiftly and effectively investigated and prosecuted and that the perpetrators are brought to justice — in accordance with their duties under the International Covenant on Civil and Political Rights (ICCPR), the European Convention on Human Rights (ECHR) and their commitments as participating states in the Organisation for Security and Cooperation in Europe (OSCE).

The AEJ denounce the use of violence against journalists and all attempts to silence critical or differing voices, and remind journalists and other media practitioners of the importance of investigating, reporting and exposing abuses of power, coercion and intimidation aimed at silencing critical and independent voices.

AEJ members urge determined actions to stop political and other forms of interference in editorial content; impunity which creates a climate of fear and self-censorship; oppressive media laws and misuses of administrative powers and fines; abuse of laws related to defamation, blasphemy and libel; and actions by state authorities and concerned citizens to eradicate persistent failures to find and punish crimes against media workers (impunity).

The Congress addresses this Resolution to the leaders and the member States of the Council of Europe, the European Union and the Organisation for Security and Cooperation in Europe.