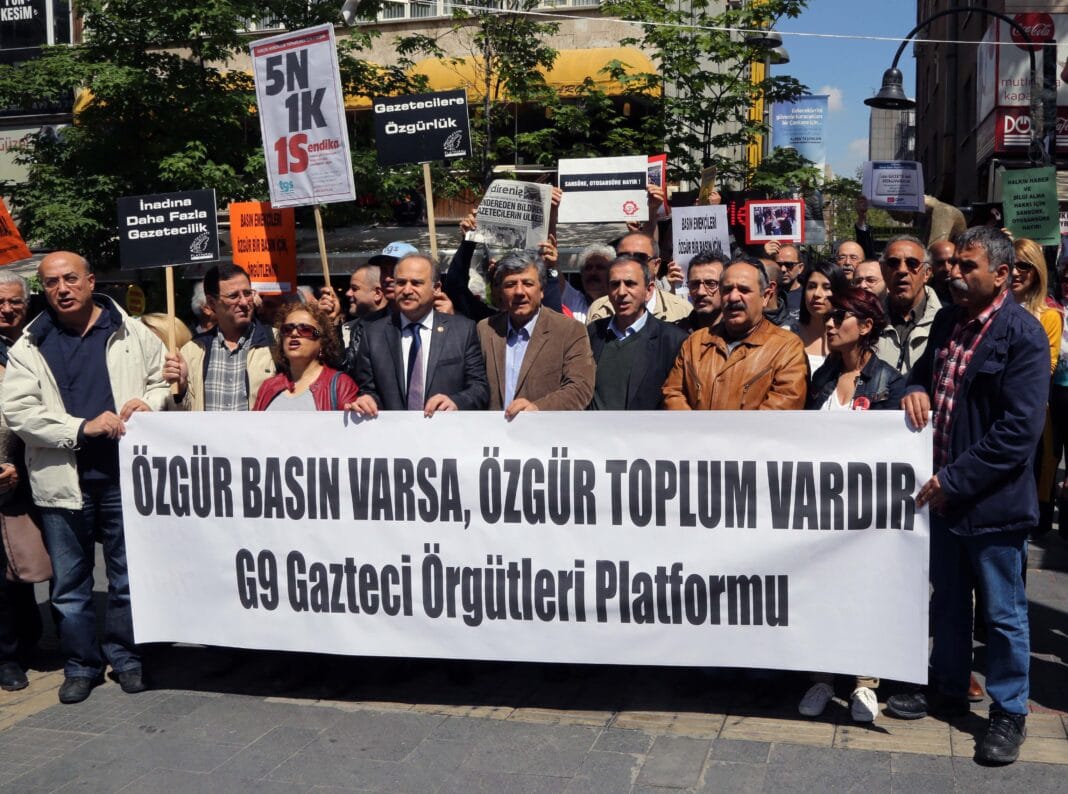 On May 3rd Turkish journalists organised public protests in Ankara and Istanbul. In Istanbul the Freedom For Journalists Platform, including the AEJ in Turkey among 94 journalists associations and unions, took part in a protest march in the Cagaloglu district. In Ankara the G-9 Platform organised another public protest. G-9 Platform’s spokesperson Dogan Tilic called on Turkish journalists to work together to resist the oppression of the government and media owners. Speakers at the rallies in Ankara and Istanbul said it was a disgrace for Turkey that the country was this year identified (by Freedom House) as the only European Country where the press is categorised as ‘Not Free’.

Major elements in the oppression of free and independent media in Turkey, Tılıç said, included the use by police of plastic bullets targeting journalists covering street protests, the unwarranted use of tear gas by the police during the Labor Day protests, and the prosecution of hundreds of journalist as “terror” suspects. Hundreds of journalists have been forced out of their jobs due to government pressure, while the government has spent hundreds of millions of dollars to create media that are loyal to itself. A number of opposition MPs supported the journalists’ protests.

In Croatia Zdenko Duka, who is the AEJ’s representative and president of the Croatian Journalists Association, took part in a press conference on 2 May to highlight the acute pressures on independent journalism in the country. Croatian journalists are engaged in a campaign to change the Criminal Code to remove the new offence of bringing “shame” or “humiliation” on an individual. The goverment has said it will amend the law, but journalists insist that their right to report on matters of public interest must be safeguarded. Harsh economic conditions and austerity policies continue to debilitate the media landscape, especially in Croatia’s newspaper sector. Publishers have drastically reduced their budgets and new investment is very scarce. Investigative journalism is particularly hard hit. The Ministry of Culture has revealed that during the past five years about 30 percent jobs of journalists’ jobs in Croatia have disappeared. In the print media revenues have been slashed in half between 2008 and now.