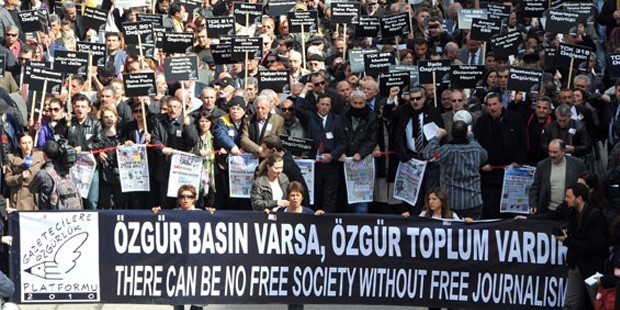 Turkey’s G-9 Platform of 12 leading journalists associations chaired by AEJ Honorary Deputy Chairman L. Dogan Tilic staged a protest on Saturday in the main Kizilay Square of Ankara, the Turkish capital, calling on the government to end its oppression of the media and asking President Abdullah Gul to veto a new internet bill which drastically expands the government’s powers to block online content.

On 6 February the Turkish parliament passed far-reaching legislation limiting freedom of speech and press freedom online, in the name of protecting online privacy. The new law, which must be approved by the President to become law, allows the telecommunications authority to act without a court order to block asses to websites that are deemed to violate privacy or to contain ‘insulting’ language.

During the protest Turkish journalists appealed to the international journalistic community to join them in demanding that President Gül should veto the controversial internet bill. They also demanded an end to the widespread and well-documented use of police violence against journalists as well as peaceful protestors.Addressing the crowd in the name of the G-9 Platform and the AEJ, Tilic accused the government ofseeking to ‘control everything’ in Turkey, from the trade unions to the media. He warned that this over-reaching ambition risked destroying democratic freedoms and that by pursuing such unconstrained powers the government would end up consuming and destroying itself.