MEP Eppink: ‘UK not alone in its dissatisfaction with the EU’ 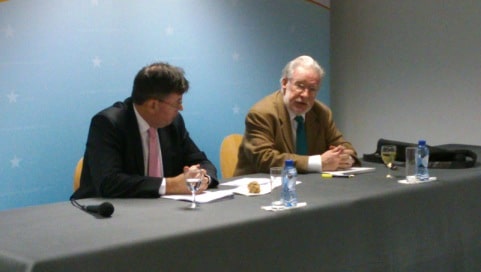 The AEJ Belgian Section’s New Year season of speakers opened strongly with a lunch time address by MEP Derk Jan Eppink (left on picture) who claimed premier David Cameron’s recent speech promising the British electorate an In/Out referendum on EU membership “asked all the right questions.” The Conservatives and Reformist EP group vice president said the problem was not so much the depth of the coming negotiations between the UK and Brussels, but how to sell the results to voters increasingly hostile voters encouraged by the “political hooligans” of the UKIP party.

In due time, he predicted, there will be a European Convention on which a British plebiscite would be based. Eppink stressed the UK was not alone in its dissatisfaction with the Union’s status quo; it has “silent allies” in Sweden, Finland, the other Baltic nations and The Netherlands who represented the vanguard leading smaller members. The MEP said these countries feared the UK’s possible departure because the result would be a duopoly of power and leadership between Paris and Berlin, a rather dismal prospect for everyone else, he said.

Looked at in this way, Eppink said Cameron is not in fact asking for very much – certainly not fundamental change. Above all, the Prime Minister aspires to an altered balance of competences between Brussels and member capitals.

Why was that apparently so feared?

Eppink said there were already significant signals from Germany that the country would take a constructive role in finding a deal which might meet British approval. Other chancelleries were moving in the same direction but have not so far declared themselves. “Only France will have to be dragged to the negotiating table,” Eppink said.

The meeting, chaired by AEJ prominent David Haworth, was held on January 29th in the Press Club Brussels Europe