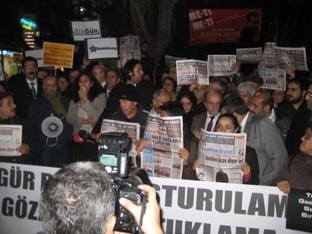 Thirty-eight more Turkish journalists were detained on Tuesday in a new wave of police operations against The Union of Kurdish Communities (KCK), the umbrella organization that also includes the outlawed Kurdistan Workers’ Party (PKK), Thousands of journalists and their supporters took to the streets in Istanbul and Ankara, protesting the detention of their colleagues, who are due to appear in court very soon.

20 of the journalists are reported to have begun a hunger strike in police detention.

Turkish journalists organizations and the Freedom For Journalists Platform (GOP), which brought together almost 100 journalists associations, strongly condemned the detentions and demanded the removal of the Anti-Terror Law under which they were arrested.

“There are more than 70 journalists in prisons and we’re expected to accept that more will be joining them. We’re here today not just to defend the journalists but our right to information and our freedom of speech” said Alper Turgut, Turkish Union of Journalists (TGS), during the protest in Istanbul.

AEJ Deputy Chair L. Dogan Tilic condemned the detentions in a statement to Turkish media, saying that “there seems to be people in power who wants Turkey to break an unbreakable record concerning the number of journalists in jail. These detentions lead to an atmosphere of fear in the country and to self-censorship among journalists”.

“A new term, authoritarian democracy is in currency for a while. Now the democracy is gone and we’re stuck with authoritarian. Whatever the issue may be, it’s the press’ duty to scrutinize it. All governments must realize this: It’s our duty” said Tugrul Eryılmaz, senior editor of Radikal daily who protested the detentions.

Last month the AEJ was a part of an international mission to demonstrate solidarity with jailed journalists and to demand their immediate release. The mission also issued a report and voiced the serious concerns of international organisations to the Turkish government and politicians.