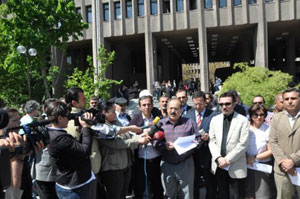 For World Press Freedom Day AEJ Turkey within the G-9 Platform organised three major activities. A joint press statement was made and covered especially by the internet media. In the statement the press freedom record of Turkey was briefed and both the government and the media owners were criticized. (See how it is covered by a leading internet medium: http://www.medyatava.com/haber.asp?id=65144).

Also a panel was organised together with Ankara University Communications Faculty. The title of the panel was Press Freedom in Turkey, Dogan Tilic was one of the speakers as AEJ Turkey representative. And last but not least, a very influential action protesting wire tapping was organised in front of the Justice Palace in Ankara and a hundred pettitions were given to the prosecutor by journalists asking if their communictiaons were wiretapped. Click here for the report from Anatolia News Agency.