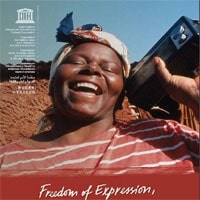 In his message for World Press Freedom Day 2009, the Director-General of UNESCO Koïchiro Matsuura stressed that: “We must strengthen our efforts to build a media that is critical of inherited assumptions yet tolerant of alternative perspectives; a media that brings competing narratives into a shared story of interdependence; a media that responds to diversity through dialogue.”

Based on the premise that only a free media will innately contribute to the dialogue and understanding across divides, the two day programme will be divided into four sessions, during which media professionals from around the world will discuss:

The conference has been organized under the patronage of Her Highness Sheikha Mozah Bint Nasser Al- Missned, consort of His Highness the Emir of Qatar Shiekh Hamad Bin Khalifa Al Thani.

South-African journalist Allister Sparks, the author of several critically acclaimed books on his country’s transition from apartheid including, most recently, Beyond the Miracle: Inside the New South Africa, will present the keynote speech.

During the conference, Mr Matsuura will present the 2009 World Press Freedom Prize, awarded posthumously to murdered Sri Lankan journalist Lasantha Wickrematunge. Mr Wickrematunge’s widow, Sonali Wickrematunge, will accept the prize, which is supported by the Ottaway and Cano foundations and JP/Politiken Newspaper LTD.

Conference programme and UNESCO information on the Day