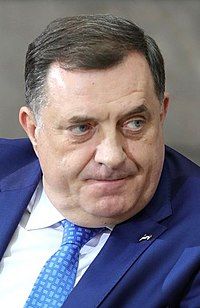 Slavic tradition and overt Russian backing (including by the Orthodox Church) have encouraged Serbia to stir up dissent and to subvert western attempts to bring peace to the Balkans, Reuters reports.

One of the best-researched and most alarming analyses of what Putin plans next appeared in Der Spiegel (Eng) just before the Russian “Victory Day”. Under the headline “Putin’s Brothers – Tensions Mount in the Balkans as Bosnia and Herzegovina Threatens to Fracture” the paper quotes Austrian foreign minister Alexander Schallenberg: “We all know that Moscow has the ability to cause problems in other areas of the world as well.

“If the situation explodes in the Western Balkans, it would essentially mean conflict in the EU’s backyard.”

He insists that the remaining six non-EU countries in the Balkans must be integrated into the bloc as soon as possible. “That is self-protection, not altruism.” The signals coming from regions populated by Serbs – the Orthodox kinsfolk of Russia – are unsettling. Clouds have grown especially dark in the majority Serb entity of Bosnia and Herzegovina, the Republika Srpska.

With the blessing of Moscow, the prime minister of the entity, Milorad Dodik, has in recent months been intensifying his efforts at achieving his long-term goal of secession.

Then there is Moldova and neighbouring sort-of-state Transnistria with its complement of 1,500 Russian “peacekeepers”. Its breakaway authorities have been in conflict with various Moldovan governments for 30 years, an ideal “frozen conflict” of the kind which which can be detonated whenever Moscow decides.

A seres of unexplained explosions in Transnistria have set nerves jangling, writes Marc Champion of Bloomberg, after a Russian general included Transnistria in Moscow’s war aims, arguing, as in Ukraine, that ethnic Russians there were being abused.