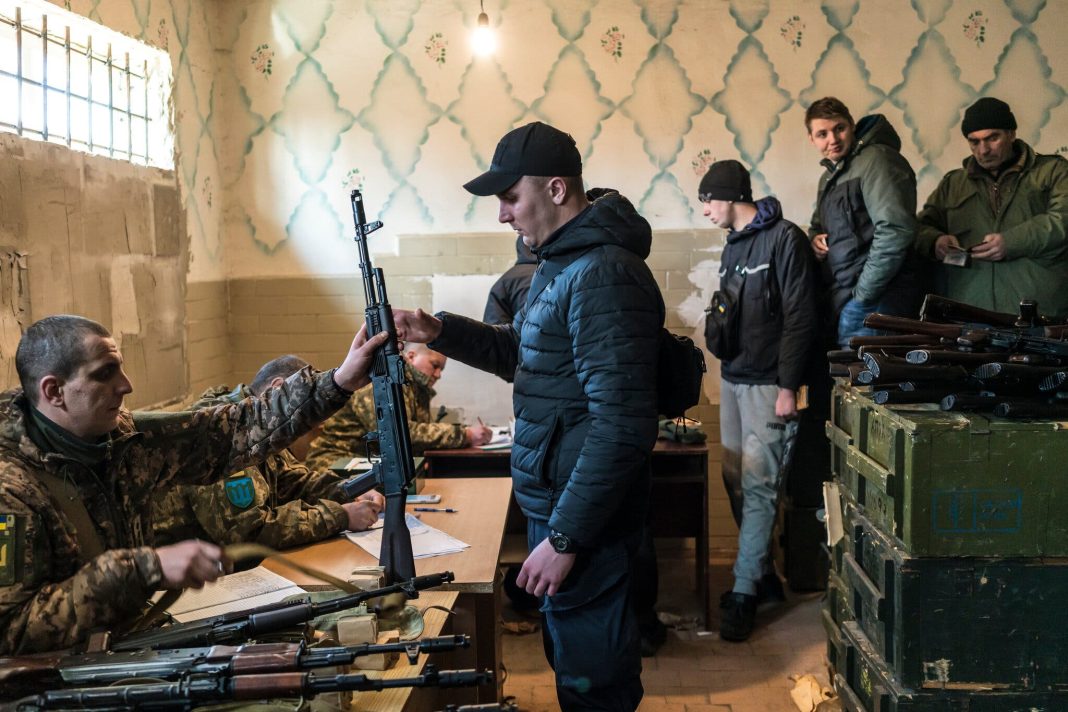 The EU has announced that it intends to begin shipping arms to Ukraine in a historic manoeuvre to bolster its heroic defence. EU president Ursula von der Leyen, speaking at a press conference this afternoon, said the unprecedented move marked a “watershed moment.”

Next came the momentous decision to ban Russian planes from EU airspace, including the private jets of oligarchs.

She also announced new sanctions to target Russia and Belarus, and a ban on Russia using European airspace.

This follow Vladimir Putin ordering his military command to put nuclear-armed forces on high alert on Sunday as Ukrainian fighters defending the city of Kharkiv said they had repelled an attack by invading Russian troops. Meanwhile the west stepped up efforts to punish Moscow for Europe’s biggest war in more than 50 years.

This dramatic escalation by Putin followed hot on the heels of US and western allies agreeing stronger sanctions on the Russian central bank and the removal of  some of the country’s lenders from the Swift messaging system — crucial for global payments — in some of the toughest measures ever taken against a G20 economy.

Earlier in the day there was a remarkable change in German defence policy. In a historic move, Chancellor Olaf Scholz announced a huge boost in military spending in response to the invasion of Ukraine.

The US condemned Russia’s move as “totally unacceptable” and said Putin was seeking to “put fear in the world”. Putin issued the order to put Russia’s strategic deterrence forces, including the units in charge of its nuclear capabilities, on high alert in response to what he called “illegitimate western sanctions”.

“As you can see, not only do Western countries take unfriendly measures against our country in the economic dimension – I mean the illegal sanctions that everyone knows about very well – but also the top officials of leading NATO countries allow themselves to make aggressive statements with regards to our country,” Putin said on state television.”

The nuclear applies to the traditional nuclear deterrent and new hypersonic missiles. But it does not necessarily mean Russia is preparing for a nuclear strike. The measure is consistent with a doctrine published in 2020 under which Russia reserves the right to use its nuclear weapons “if the very existence of the state is threatened in the case of aggression from regular weapons”.

Reuters reported that on the fourth day of the biggest assault on a European state since World War Two, the Ukrainian president’s office said they would be open to negotiations between Kyiv and Moscow, mooted for a location on the Belarusian-Ukrainian border. They would meet without preconditions, it said.

As missiles rained down on Ukrainian cities, thousands of Ukrainian civilians, mainly women and children, were fleeing from the Russian assault into neighbouring countries. The capital Kyiv was still in Ukrainian government hands, with President Volodymyr Zelenskiy rallying his people despite Russian shelling of civilian infrastructure.

In a speech prior to the invasion on Thursday, Putin made reference to his nuclear arsenal saying Russia’s response to any country that tried to hinder the operation would be immediate and carry “consequences that you have never encountered in your history.”

France’s Foreign Minister retorted the same day that when making such threats Putin should remember that NATO too was a nuclear alliance.

According the Rueters in Kyiv, Ukraine’s foreign minister Dmytro Kuleba said Putin’s deterrence order was an attempt to pressure Kyiv during talks but it would not be cowed. If Putin used nuclear weapons against Ukraine it would be a catastrophe for the world, he said.

U.S. Ambassador to the United Nations Linda Thomas-Greenfield told CBS: “President Putin is continuing to escalate this war in a manner that is totally unacceptable and we have to continue to stem his actions in the strongest possible way”. The decision highlighted the need to hold the Russian president “accountable” both “at the UN and elsewhere”, she added.

On the ground in Ukraine, the mayor of Kharkiv claimed Ukrainian forces were back in full control of the country’s second city after repelling a Russian incursion that included special forces and marked the first time its forces had entered since the invasion Putin launched four days ago.

Oleg Synegubov, head of the regional administration, said in a Telegram post that the city was being “completely cleansed” of Russian forces. “We have complete control over Kharkiv!” he said. Residents of the city were warned to stay in their homes.

The ‘hunter’ group of Chechen attack dogs, likely to number in the hundreds, was blown to pieces on their second day in the country. Those killed include Chechen general Magomed Tushaev, one of the regime’s most highly-decorated soldiers. Vladimir Putin had green-lighted their deployment, with each fighter given a deck of cards to help them recognise Ukrainian leaders they were ordered to capture and kill.