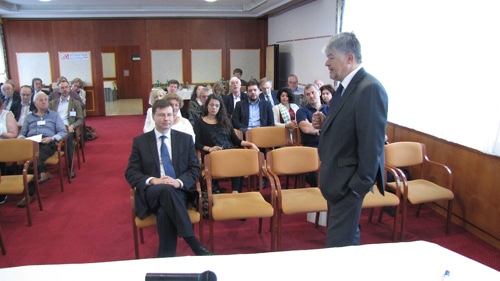 The opening session of the AEJ 2014 Congress in Austria on 18 October was addressed by Commission Vice-President, Valdis Dombrovskis, newly appointed Commissioner for the Euro and Social dialogue, and a former Prime-Minister of Latvia.

He talked about the need for Research and Development as each country returns to financial stability, highlighting the proposed €300 billion investment package and pointing out the differenece in attitude between the US and the EU in 2009 investment fell by 19% – in the US last year investment was up by a third, while in the EU it was up by just 3%, and in the US the recovery is better. In the EU/Eurozone , demand is supressed and needs to be worked on – his new portfolio will link financial and economic policy with social and employment policy.

He pointed out that the new Commission involves a re-organisation of Vice-Presidents to co-ordinate the work of the various DGs, they are in the early stages of decision making (not competing), the portfolios are more substantial and ambitions are high.

As Vice-President and Commissioner for the Euro and Social dialogue, Commissioner Dombrovkis will be working with Pierre Moscovici (Economic and Financial Affairs) and Elzbieta  Bienkowska (Internal Market)

He then addressed four major issues affecting the Commission :

The situation in Ukraine

He said Russian aggression cannot be tolerated, and while there is no unilateral military support, it is up to each country, the truce is not really functioning in his view and suggested possible NATO involvement in security.

Re the EU/Ukraine association – there is a delay in implementing the agreement signed in Kiev. It is being implemented but Ukraine doesn’t have to open its market to the EU for a year, though the EU is open to Ukraine.

All of the Baltic States are seeking to join the Euro, which will be good for their economies – they had fixed exchange rates and this is a natural progression to deeper integration under the Maastricht criteria.

Austerity and the Growth and Stability Pact

There is a need to use the flexibility within the Growth and Stability pact he said, otherwise the treaties will have to be changed and there is no time for that. He also signalled a change in policy direction, talking about the next step being growth.

Role of VPs in Commission – Mr Dombrovskis talked about the competencies allocated to VPs in their mission letters, and said they were co-ordinating within those briefs

On the FTA , he said tariffs were the main thing but not at the expense of quality and standards..

And in answer to questions he spoke about the Dialogue of Europe, saying more and more citizens and young people think of Europe.